Download v1.0 of rauc-hawkbit-updater or visit its GitHub page.

Back in 2018, rauc-hawkbit-updater was started by Prevas A/S as a C/GLib port of our rauc-hawkbit Python prototype (also called RAUC hawkBit Client) that was mainly developed for showcases and to serve as a demonstration and evaluation platform for others.

rauc-hawkbit-updater instead is explicitly developed with real-world use cases in mind. Just as its earlier Python counterpart, it operates on the target as an interface between RAUC, the embedded Linux update framework, and hawkBit, an OTA roll-out backend framework.

Since its first incarnation in 2018, rauc-hawkbit-updater's code was refactored, bugs were fixed, and features were added. With the addition of a test suite that was capable of performing interaction tests with actual hawkBit test instances, the project got more mature and, with the beginning of 2020, rauc-hawkbit-updater was finally moved to the RAUC GitHub organization under the maintenance of Lasse Klok Mikkelsen (Prevas A/S).

We won't stop here. A whole bunch of feature pull requests are already queued up, i.e.:

So if you are interested in managing your embedded system's updates with RAUC and hawkBit, make sure to check it out.

Wonder How To Get Started?

For more details follow our Quickstart guide and the documentation. You're invited to join the community, discuss and contribute! Either via matrix channel #rauc or on GitHub Issues, Pull requests or Discussions.

Finally, we would like to thank the folks from Prevas A/S for starting this project and making it open source under LGPL-2.1, and especially to Prevas' Lasse Klok Mikkelsen, the lead maintainer until the v1.0 release. Starting with v1.0, the project will now be primarily maintained by the Pengutronix developers Bastian Krause and Enrico Jörns. 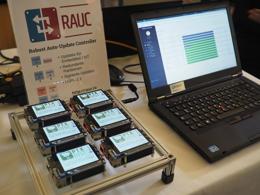 OTA field updates are a common requirement in modern embedded device deployments. The larger the amount of devices to control, the more important is having a good infrastructure that is reliable in updating and smart in rolling out the software.

Here it is, commit number 1700, 291 commits after the v1.2 tag: The v1.3 release of RAUC is out in the wild and adds a lot of new and useful features together with some fixes.